The meeting brought together NIHR statisticians and researchers for educational and information-sharing talks, breakout groups on hot topics, and networking. New initiatives for this year included an early career pre-conference event and the pilot of the NIHR Statisticians mentoring scheme. Both were organised by the Career Development Working Group.

Dr Louise Wood, Director of Science, Research and Evidence at the Department of Health opened the conference with an update on the NIHR. This included the vision for Health Futures,  improving the health and wealth of the nation and how research activity improves health outcomes.

The second day of Conference began with Professor Peter Diggle presenting his experience of working with data scientists. Professor Diggle is Director of Training at Health Data Research UK and Distinguished University Professor of Statistics, Lancaster University.  He spoke about the critical role of statisticians and their approach to design and modelling in the world of  data science.

Professor Elaine Hay is Director of the Arthritis Research UK Primary Care Centre, Keele University and gave the final talk.. She spoke from her perspective as Programme Director for NIHR Programme Grants for Applied Research. This programme is now encouraging more diverse applications with more focus on methodology while retaining a patient benefit focus.

The NIHR Statistics Group Conference 2020 will be held on June 11th and 12th in Sheffield. 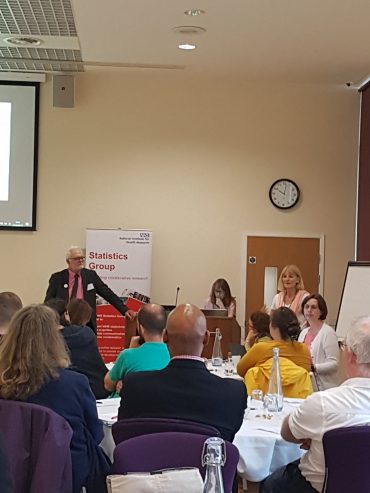